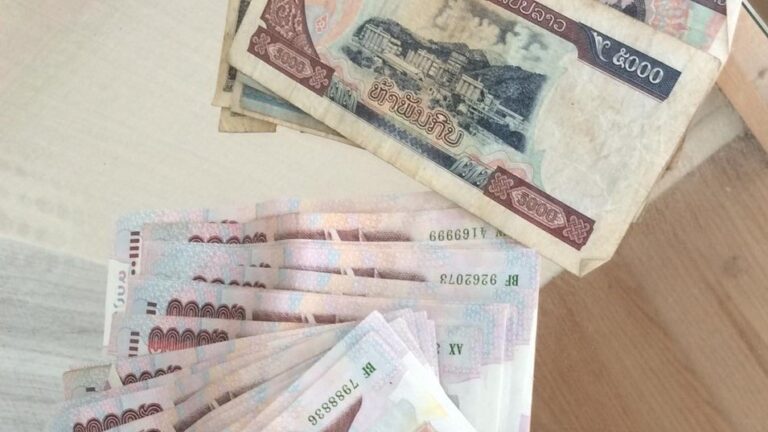 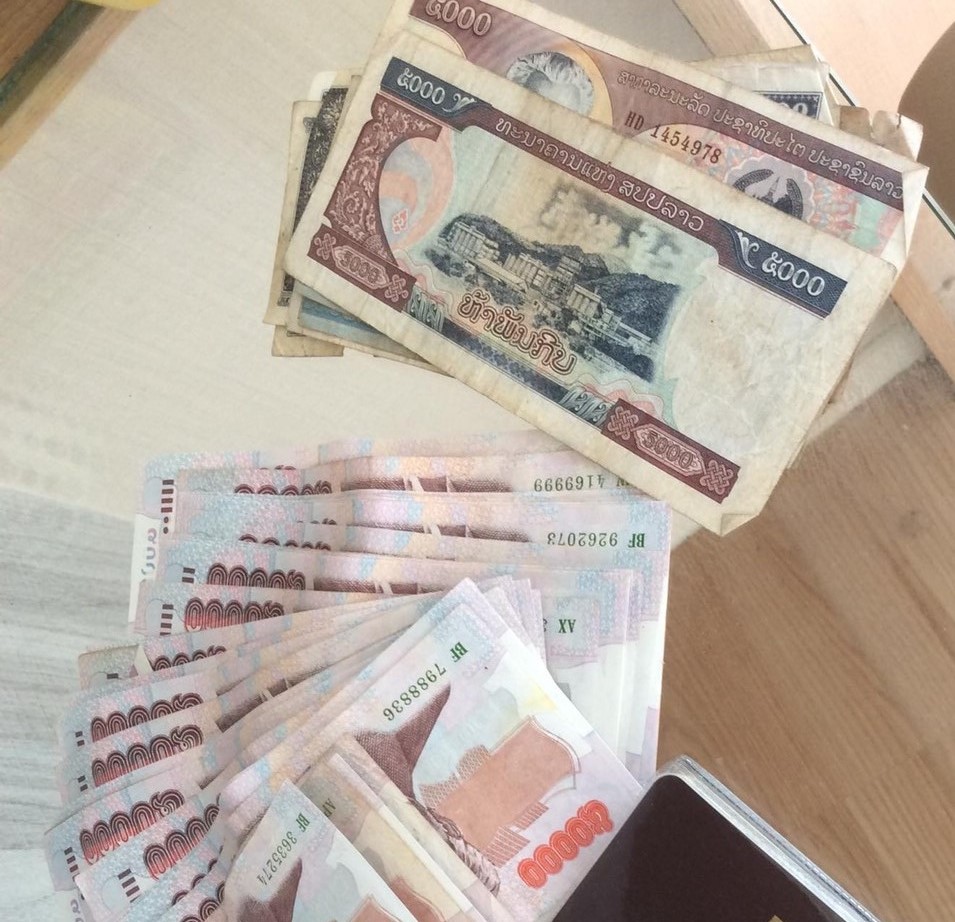 Money is always an interesting topic and in Laos it’s no different. Therefore in this article we want to talk about some relevant topics regarding money in Laos. First of all: If you’ve always wanted to be a millionaire, Laos is the right country for you, because the local currency is not worth much compared to other currencies and having a some millions really isn’t a big deal. Curious? Then read on.

The official currency of Laos is the kip. In fact, the currency has been around since 1945, but after France took control of the country, the currency temporarily vanished. It was only reintroduced a few years after the Lao independence (1949) in 1955 and has been the official means of payment ever since. Kip is available in both coins and banknotes, but coins are practically not in circulation, which is not surprising given the low value. There are banknotes ranging from 1 kip to 100.000 kip. However, even 100,000 kip is not that much and just a bit more than $ 10. Nevertheless, you should pay with 100,000 kip banknotes as rarely as possible, since not everyone has enough change. Unless you want to make major purchases 10,000, 20,000 or 50,000 kip banknotes are way better for paying in Laos.

Although kip is the official currency in Laos, there are other currencies that are accepted as a form of payment. Paying in dollars is common and the currency is even more popular with many locals than the actual local currency. In some places, including mainly Chinese-influenced districts, you can also pay with yuan. In Vientiane, for example, there are places where many Chinese live and, as a result, there are a number of Chinese hotels and restaurants. You can assume that you can also pay with yuan there. If you’re in the border towns Savannakhet or Vientiane you usually can also pay with Thai baht. The euro on the other hand is far less popular and European travelers are better off changing the currency in advance.

In the more touristy cities, you can assume that there are numerous options to change money. The good thing about this is that you can sometimes even get better exchange rates than those you see on the Internet. For example, we’ve already changed Thai baht in Vang Vieng and received a significantly better exchange rate than the one we saw on the Internet. You should only avoid changing money at the airport, as you‘ll usually get the comparatively worst exchange rates.

Withdrawing money is not a big deal, since at least in tourist cities such as Vang Vieng, Vientiane and Luang Prabang there are numerous ATMs. For example ATMs in Vang Vieng are quite common and accept most bank cards. Only in rural areas, which are hardly frequented by tourists, you should better take cash with you, since you may not find many (or any) ATMs there.

All over the world there are countries where tourists pay more than locals. So it is by no means just a phenomenon that occurs in Laos or other countries of Southeast Asia. Nevertheless, you should be aware that you normally have to pay significantly more than the locals. Paying twice or three times the original price is not uncommon, but you can still haggle for a better price. However, you shouldn‘t be disrespectful and consider the economic situation of the Lao people. After all, paying a little more isn’t necessarily a problem as long as the price is more or less within reasonable limits. Still, you should be aware of dual pricing and not let anyone scam you.

How to save money

Saving money is a complex topic and we may publish an article about that in the future, but there’s one thing you should be aware: Laos is by no means one of the cheapest countries in Southeast Asia. In fact, Laos is relatively expensive, mainly because most of the products have to be imported from abroad. Therefore if you want to save money, you should avoid shopping in supermarkets and try to buy more local products. Unfortunately, there isn’t too much to choose from, but some things, such as coffee and seaweed, are also harvested and produced in Laos.